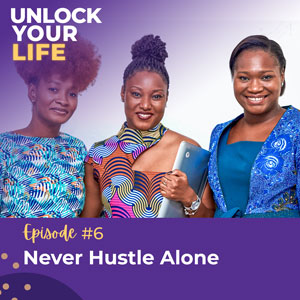 I recently attended an amazing conference, and while I was there, someone said something that really impacted me: never hustle alone. Even the Lone Ranger had some help, and when we get together and join our creativity, we can make a difference in the world.

If we want to build a world where we take care of each other, we first have to be that person ourselves. Changing the world comes from changing ourselves from within, and when you step up, other people will step up with you.

Join me this week as I’m showing you why you should never hustle alone and how to get clear about what you want so that you can inspire others to do the same. If you want to go fast, go by yourself. But if you want to go far, let’s do it together. Discover how to surround yourself with like-minded people and the importance of building each other up in the world.

To celebrate the launch of this show, I am giving away a soft, cushy Unlock Your Life hoody to 5 lucky listeners who follow, rate, and review the show. Click here to learn more about the contest and how to enter – I’ll be announcing the winner on an upcoming episode!

What You’ll Learn from this Episode:

Listen to the Full Episode:

Featured on the Show:

Welcome to the Unlock Your Life podcast, a podcast for highly successful visionary women who want more out of life. If you feel that ache of unfulfillment in your soul, you’re in the right place sis. Join life mastery consultant Lori A. Harris as she teaches you how to stop living for others and finally put yourself first. Let’s dive into today’s show.

So one of the principles was that we should take control of our health. So everyone had their own speculum. We would get together and look at our own reproductive organs together in a circle. So there would be lights, there would be the speculum, there would be a mirror, and you would learn the mechanics of how your body worked. I loved it.

What I learned in that clinic, what I observed over and over again no matter what. When people came in for services whether they were coming in for tests or a procedure or an examination, lots of women came in and they had support. There would be white women. They come in with their girlfriends. There’d be white women. They come in with their partners. There would be Latin X women who would come in with their families or their partners or their girlfriends. Then there were the black women. The black women came in alone. They always came in alone. I noticed that and I took that in.

We’re in a different age now. It’s a different time. We are reaching out to one another to support one another, and we’re here to support each other in our dreams. So while I was the resident black woman in the clinic holding women’s hands through various procedures, I get to be the black woman in the room right now. I want to be your support. I want to help you out. I am a professional encourager. It’s what I love to do. I love to see you win. I want to see everybody shine.

Now they’re bringing their genius together to show what can happen when people of like mind and positivity get together. We can change the world. We are a force of nature. People who believe that life is meant to be good and that we are meant to prosper. When we get together and join our creativity, we make a difference in the world.

So I have a group coaching program. What I love about my group is the dynamic of seeing these women loving and supporting each other. So in the space of about nine months, all of their lives look drastically different. It’s because of the encouragement that they have from being in that circle together.

We’ve created the sacred circle where women get to tell the truth about what they really, really want. They allow their desires to bubble up to the surface and then they say them out loud. They witness their mastermind sister look them in the eye and not shrink back but hold for them. “Oh, you think I can do that? You think it’s possible?” It’s an incredible thing.

What happens in the circle is my clients identify their heart’s desire. They say it out loud and then we contemplate, “Well, what would be the next move? What would be an inspired action that would move that desire forward?” The client doesn’t have to think about it all alone. She has the support of her mastermind sisters who are supporting the dream, supporting the vision. They are sourcing from within themselves. Well, what might be a good idea? What’s one way we might be able to handle that?

So we all come up with great ideas, and then the client decides which of those ideas she’s going to move on. Then this magical wonderful thing happens. We ask the question, “Well, when will you do it? When will you make the move? When will you take that step?” This group is so incredible. I love them so much because oftentimes, they say, “Oh, I’ll do it right now.” They don’t say, “Oh I’ll do it as soon as I get off the call.” They sign up for things, they start things in the middle of the call. Their lives have changed dramatically. It’s a beautiful thing and an exciting thing to witness.

So when I tell you never hustle alone, I say it because that is how we are going to change the world. What would happen if people of heart and love and vision got together and told themselves the truth and acted from their heart’s center and from their own creativity? We would change the world.

So how can you do that for yourself? How can you attract a squad of people who want nothing but the best for you? Well, first I’m inviting you to get clear about what you want. What would it look like if you had a really good, good support system? What are you looking for? Start with a vision. Know from within yourself what would really be helpful.

As my daddy would say, show yourself to be friendly. Be what it is that you are looking for in the world. Be that for yourself. Be that for other people. Start to give that which it is that you want. Be what you want to receive. Be what you want, believe all the time. Believe in the good that is in the world. Believe in yourself. Believe in others. Don’t wait to see what everyone else is doing. Don’t hold back. When you see something that needs to be said, say it. If you see something that needs to be done, do it. Don’t sit back going, “Well somebody ought to.” You are somebody. When you jump in, other people will join behind you and support you.

Sometimes people learn about the kind of person I am from travelling with me, and it’s not always fun. I have told my daughter what the rules are for being with me. She’s taken those rules with her. So when she started dating and going out and going out to the club, I said, “You go into the club with your girlfriend, you leave the club with your girlfriend. you watch out for your girlfriend. You make sure you know what your friend is doing and where she is. You look out for her. You look out for each other. That is the code. We take care of one another.” She’s taken that on. I love that about her. That’s what it looks like as a young woman.

When she was in elementary school, I said, “You see them over there? You see them being mean to Eric? I better not see you ever do it.” She said, “I wouldn’t mommy. I wouldn’t ever do that.” Because we have to remember we’re in this together. So we don’t invite that kind of negativity into our world. Even as a little one, I taught my daughter to believe in herself, believe in others, and be somebody that can be encouraging.

We’ve been travelling. We’ve been in places all over the world where we see a woman in trouble. Even though we don’t have a common language, my daughter and I, we get involved. We go, “Eh, eh, eh. What’s going on here? What’s going on? Leave her alone. Don’t do that.” I’ve noticed that when you step up, other people will step up with you. Don’t be the person waiting to see what is everyone else doing.

So if we want to build a world where we take care of each other, we first have to be that person ourselves. Changing the world comes from changing ourselves from within, standing from the principle of I am the person who is bringing this life forward. I am the person that is bringing this world forward. I invite you to decide. When I have a squad of people that is supporting me, this is what it looks like. This is how I will behave. This is how I will react. This is what I’m willing to give. Be that thing that you’re looking for and watch what happens. Watch yourself draw to you everything you could ever possibly need.

Well, that’s it for episode six of the Unlock Your Life podcast. In this episode we talked about never hustle alone. Never hustle alone in order to create the world that you would love to see. The first step in doing that is start with a vision. Decide what is it that you would love to create. Then after you’ve created that vision, start being that kind of person. Look for a support system. Every winner has a coach. You can be that for someone else. You can be a support system. You can form your own group. Never hustle alone. Give what you want to receive. Be who you want to be. Have what you want to have.

So if you want to build a squad, be someone who thinks big and holds big visions for others. Be a connector. Be someone who’s willing to share your network, and think about the people in your network that can be helpful to others. Be generous with your own ideas, and watch what happens. You will be the kind of person that attracts helpers and people that are willing to give. As you give, you will continue to receive. This is my hope and prayer for you.

So if you want to win and Unlock Your Life hoodie, this is what you need to do. I’m giving it to five lucky listeners who follow, rate, and review this show. I would love it if you gave me a five star review, but more importantly I’m looking for an honest assessment of what you like about the show, what you would love more of, what you would love less of. How can I make this a great show that brings lots of value?

So give me your feedback. Go to loriaharris.com/podcastlaunch and learn more about the podcast and how you can enter. See you next time on the Unlock Your Life podcast. Until next time, this is your life. Make it a great one.

Please log in again. The login page will open in a new tab. After logging in you can close it and return to this page.